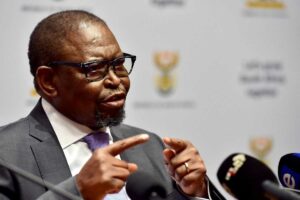 In his maiden budget speech last week, Finance Minister Enoch Gondongwana dedicated a section of his speech to the climate, urging all South African companies that have not already done so to develop plans to progressively reduce carbon emissions over the next ten years, or face steep taxes in the future. “The structure of the economy will need to change,” he noted, “to adapt to the needs of addressing climate change.”

He acknowledged the vital need to lower greenhouse emissions (GHG) and spelt out how a carbon tax is the main tool at government’s disposal, announcing that government would extend the first phase of South Africa’s Carbon Tax by three years to December 31, 2025, as a way of supporting businesses in their clean transition endeavours.

Marleny Arnoldi, reporting for Engineering News, writes that “To meet the country’s Nationally Determined Contribution, which sets out its climate change mitigation plans, South Africa has to ensure its GHG emissions peak by 2025 and quickly decline to between 350-million and 420-million tonnes by 2030, and approach net-zero emissions by 2050.”

Treasury deems the Carbon Tax integral to lowering emissions and maintaining competitiveness since exports of carbon-intensive products such as iron and steel will likely face carbon taxes in Europe. Speaking to the National Assembly, the Minister said that “In line with our commitments at COP26, the carbon tax rate will be progressively increased every year to reach $20 per tonne. In the second phase from 2026 onwards, the carbon tax rate will have larger annual increases to reach at least $30 by 2030, and the allowances will rapidly fall away,”. Of course the Minister is keenly aware that in the effort to reduce emissions, “communities must not be left behind as production shifts to greener solutions.”

Arnoldi, writes that “Treasury also disclosed that mandatory carbon budgeting comes into effect on January 1, 2023, at which time the carbon budget allowance of 5% will fall away. It is proposed that a higher carbon tax rate of R640/t of carbon dioxide equivalent (CO2e) will apply to GHG emissions exceeding the carbon budget. These amendments will be legislated once the Climate Change Bill is enacted.”

The overall tone and direction of the speech were broadly welcomed by all political parties in South Africa.